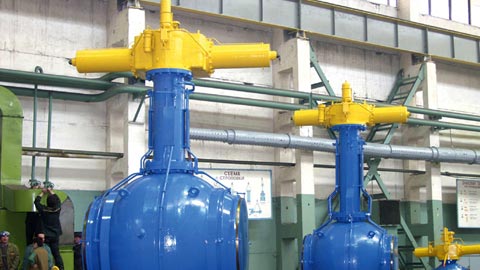 Alexin Joint Stock Company, Heavy Industrial Valves (known as Tyazhpromarmatura in Russian) was established in 1778. The company designs and manufactures valves and gates for gas, oil, chemical and power industries. Today Tyazhpromarmatura is the largest valve maker in Russia and the Commonwealth of Independent States, which is composed of 11 former Soviet republics. The company’s major clients are the largest oil and gas extracting and transporting companies: Gazprom, Transneft, Lukoil, Tatneft and others.

The company’s primary products are slide and wedge gate valves, and ball valves. These products are used in harsh conditions, such as under strong oil and gas pressure, in explosive atmospheres, in polar climates and so on, where quality requirements are very high.

Tyazhpromarmatura’s diversification policy is aimed at developing advanced products such as valves for nuclear and thermoelectric power plants, as well as ball valves for gas and oil that contains abrasive components. For example, testing has been successfully completed for a 300 mm (approx. one foot) gate valve withstanding pressures of PN 11MPa and temperatures of more than 300 degrees (C) to be used with two different types of Russian nuclear reactors. Currently the valve is in production for nuclear power stations at Voronezh, Saint-Petersburg and Rostov regions. Annual sales exceed 50,000 units.

At the beginning of 2007, Tyazhpromarmatura decided to automate its product development process. The primary goals of the project were saving design and production planning time, and enhancing the quality of products and management processes. The first stage of the project was the selection of a software solution. A working group of leading engineering experts was established under the supervision of Tyazhpromarmatura’s IT department. “The project’s basic goals were to establish a single design approach across the entire company, to transition to a single data format and to improve the quality of design documentation,” says Mikhail Gusev, head of the company’s IT department. “We decided to start by choosing a CAD system.”

For half a year the company’s experts analyzed the CAD market. Four well-known CAD systems were selected for further consideration, two being Russian and two being foreign, including the Solid Edge® CAD program from Siemens Digital Industries Software. After a thorough analysis, they decided to purchase Solid Edge.

“While selecting the system, we used cost-to-quality analysis and considered that the final output of the designer’s work is a drawing, so the functionality for drawing generation and standards-compliant annotation was very important,” says Gusev. “We also needed a scalable solution that would allow us to later switch to a complete digital mockup and provide integration with CAM systems.” Among the proposed systems, only Solid Edge met all the requirements and successfully passed a test for building complex curved blends, which are common in the company’s products. An additional benefit was Solid Edge’s integration with the entire set of Siemens Digital Industries Software products.

The implementation team included two designers and one IT engineer. The designers received training from Siemens Digital Industries Software, gaining experience in Solid Edge’s installation, customization and usage. They then developed a standard Solid Edge drafting process that includes a compliance verification procedure applied to the digital documentation. It also includes the rules of using templates and customization tools. Thanks to its great flexibility, Solid Edge was easily configured to meet the company’s workflows and standards.

After that, specialists from Siemens Digital Industries Software started teaching 2D modeling to the other designers and manufacturing engineers. Training in 3D modeling was also performed by Siemens. The hardware was tested and updated while the training was going on so that afterwards, employees could start working immediately.

The project’s outcome was more than 80 Solid Edge workstations, training, documentation, manuals and finally, product development with Solid Edge. The transition to Solid Edge took just three months. This was possible thanks to the experience of the company’s specialists as well as the capabilities of Siemens Digital Industries Software’s solution, such as compatibility with many different data formats, easy learning, compliance with national standards, flexible customization, floating licenses and the technical support and training provided by the supplier.