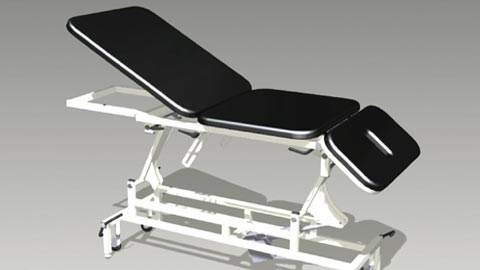 BHM Medical Inc. has been providing solutions for the elderly, disabled and the organizations and facilities that care for them for more than 15 years. Through feedback from caregivers and others who use the company’s patient transfer systems, BHM has been able to design the best equipment on the market today. The company’s products surpass the rigorous standards applicable to medical devices. This level of quality, combined with a track record of innovation, has resulted in an impressive rate of growth. For the last several years, the company has grown at a rate of more than 50 percent per year.

Supporting this growth rate has challenged the product development team to work as fast as possible while still allowing time for innovation. “As a company, we want to be perceived as a leader and not a follower, and that means being the first to introduce new features,” says Pierre Dionne, engineering manager at BHM. When the company’s previous CAD system, Mechanical Desktop, was not supporting the pace at which BHM needed to work, it was time for a replacement.

“Mechanical Desktop was not as comprehensive as we needed and some of the features didn’t work as well as we thought they should,” says Michel Corriveau, R&D designer at the company. After a selection process that evaluated Solid Edge® software, Solidworks and Inventor, BHM chose Solid Edge.

“We don’t just design products,” notes Corriveau. “We have to produce drawings for quotes and for fabrication, so one of the main reasons we chose Solid Edge was how fast it lets you make drawings. Another reason was the Parasolid kernel, which simplifies the transfer of files with our suppliers.” Solid Edge’s built-in document management capability was another selling point.

The transition to the new software went smoothly and it wasn’t long before the users realized that the work-arounds they had previously needed to get Mechanical Desktop to do what they wanted were no longer necessary. “The commands in Solid Edge had different names, like ‘protrusion’ and ‘swept protrusion’ but the more we used them, the more we were saying to ourselves, ‘Oh, this is how this feature is supposed to work,’” explains Corriveau. Finally having design software that worked as it should, designers found their productivity increasing with each month that they became more familiar with Solid Edge.

As expected, making drawings was much easier with Solid Edge – so easy that BHM now makes more views, to the benefit of the people on the shop floor. “We are also beginning to use 3D models to create assembly instructions for the shop,” adds Dionne. He and Corriveau estimate that when they started using Solid Edge, creating drawings went about two to three times as fast as with the previous CAD software. Now that people have used Solid Edge for several years, making drawings is about five times as fast as previously. File sharing with subcontractors is going more smoothly now, too, thanks to Parasolid® data transfers. With one supplier that fabricates sheet metal, the transfer is done using native Solid Edge data. “They use Solid Edge, too, so when we send them our designs, they can automatically create flat patterns and program the parts directly on their machines,” Corriveau explains. “It’s a big time-saver for them.”