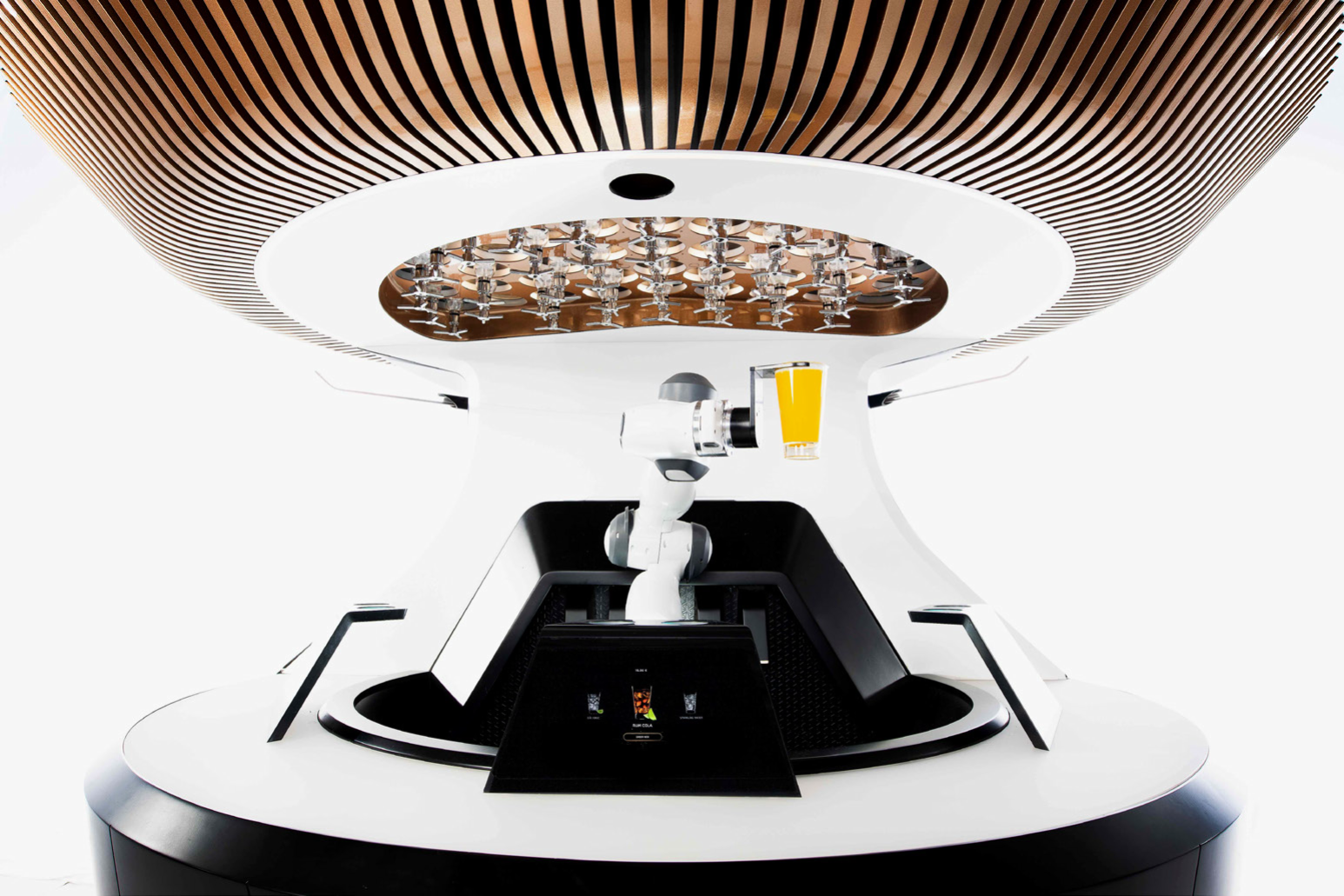 Yanu Robotics is a startup company based in Tartu, Estonia that designed Yanu, a fully autonomous, artificial intelligence-empowered bartending robot that serves drinks, handles payments and communicates with clients.

« The designers wanted things to look good, while the engineers championed functionality. Solid Edge enabled us to overcome these issues, as it reconciles both within its immersive design environment. »

« We decided to bring everything into Solid Edge, and it’s made a world of difference in terms of creating a single, frictionless workflow.«
Alan Adojaan
CEO and Founder, Yanu Robotics

Mixology is just the beginning

Yanu, the fully autonomous bartending robot, looks like something out of a science fiction movie. Standing nearly 10 feet tall, the assembly is large, cylindrical, and sleek. There are several touchscreens on its countertop that display drink choices ranging from a martini to an old fashioned. As soon as you input your order on a screen, Yanu’s single robotic arm springs to life. It grabs a glass and swivels 180 degrees to the ice dispenser. Next, the arm raises the glass, navigating it along a series of ingredient dispensers that hang from the ceiling. After moving through the correct combination, the arm lowers itself and hands you a finished drink.

Though this robotic feat is impressive enough, mixology is just the beginning. In addition to making drinks, Yanu – which is powered by artificial intelligence (AI) and handles credit card and mobile payments, verifies a client’s drinking age and communicates with patrons. Yanu is capable of making up to 100 drinks in one hour and up to 1,500 cocktails in a single load. Whether suggesting a drink or cracking a joke, this robot is poised to revolutionize the food and beverage industry.

The robot is the brainchild of Alan Adojaan, chief executive officer (CEO) and founder of Yanu Robotics (which is also the company’s name). Although the company’s first product is a highly sophisticated service robot, Adojaan’s background is in hospitality, not robotics. As anyone in food service or bartending can tell you, the industry has its fair share of challenges, especially now. Examples include a high staff turnover rate, labor shortages, high recurring expenses, and an emerging need for contactless food and beverage service.

The advantages of robotic bartenders

As a contactless, fully autonomous robot bartender, Yanu eliminates new and ongoing challenges facing the food and beverage industry, especially in the wake of the COVID-19 pandemic. This includes a rise in labor costs and staffing shortages. Yanu combats this issue by providing a cost-effective staffing option.

The robot also meets a new need for contactless bars. Yanu requires no human interaction, making it suitable for a post-pandemic service world. Along with these features, Yanu can also increase quality and service speed behind the bar. The robot can make 100 drinks in an hour, which is the equivalent of four bartenders.

“It was a constant struggle to keep the business going,” Adojaan reflects. “On an especially busy night, I realized something had to change. Soon after, I had the idea to develop a robotic solution.”

Within four years, Adojaan and his team of designers and engineers transformed Yanu from a single idea to multiple prototypes. Unlike other robotic bartenders on the market, Adojaan’s solution is mobile and compact so it can be collapsed into a 20-foot shipping container for transport. Yanu is fully autonomous and communicates with patrons. Other bartending bots are non-communicative, only semi-autonomous and require weeks to set up. In addition to its plug-and-play nature, Yanu is a cloud-based, easy-to-operate robot that includes clean and refill capabilities. It also comes with apps for administration, monitoring, and drink ordering.

Making such an advanced robot a reality – especially when “no one took me seriously at first,” Adojaan says – required the latest in robotics design technology and computer-aided design (CAD) software. For these reasons, Adojaan and his team designed and developed Yanu using Solid Edge® software, which is a part of the Xcelerator portfolio, the comprehensive and integrated portfolio of software and services from Siemens Digital Industries Software. It is part of the ecosystem of sophisticated software tools that address all aspects of the product design and development process including mechanical and electrical design, simulation, data management, and more. Designing complex, intelligent robotic systems can slow the product development process. Using Solid Edge enabled the Yanu Robotics team to get its revolutionary bartending bot to market quickly – all while overcoming many of the typical pitfalls that can affect the design process for new products.

Yanu Robotics uses the Solid Edge sheet metal capabilities to design much of the robot’s structure. Unlike other CAD programs, Solid Edge includes sheet metal-specific features like emboss, dimple, bead, multi-edge and contour flanges, straight brake, and etch, as well as applications for analysis and computer numerical control (CNC) programming to reduce design time. “The sheet metal tools allowed us to calculate component surfaces,” Ruut explains. “We could then send the results directly to the CNC machines, which was really helpful.”

Solid Edge also includes KeyShot® software, which is a real-time 3D rendering and animation tool that generates realistic images of product designs for internal or external use. “We used the KeyShot engine a lot to get a better sense of what we were designing,” Ruut says. “It was a breeze to use, and it gave us realistic, immersive renderings of Yanu – complete with lights and reflections.” Thanks to this integration, designers like Ruut can launch KeyShot directly from the Solid Edge interface. They can also send designs automatically and push changes to KeyShot without losing any settings.

Yanu designers also needed to handle the routing of wiring around their complex 3D model. Fortunately, the electrical routing module using Solid Edge supports the creation, routing, and organization of wires, cables, and bundles in mechanical assemblies. “We take advantage of this tool to establish correct wire lengths when routing the wires through clips and channels,” Ruut says. In addition to the routing tool, Solid Edge includes tools that address other aspects of the electromechanical design process. For example, it has a wiring design module for creating wiring diagrams and generating service documentation, as well as a harness design module for designing harnesses and form boards.

Solid Edge has features that incorporate rich data management functionality, enabling budding companies like Yanu to work efficiently with their growing number of CAD files. It also lets users review and edit files and perform revision and release operations on parts, assemblies, and drawings. “Data management is our friend,” Ruut says. “We need to keep an eye on all moving parts to ensure everything is ordered on time, and Solid Edge lets us do that easily.”

Thanks to these software capabilities, the Yanu Robotics team unlocked many benefits, such as bridging the gap between the designers that worked on the robot’s appearance and the engineers that worked on its internal mechanics. According to Adojaan, getting the designers and engineers on the same page wasn’t always easy. “The designers wanted things to look good while the engineers championed functionality,” he explains. “Solid Edge enabled us to overcome these issues as it reconciles both within its immersive design environment.”

Using Solid Edge also provided the Yanu Robotics team with a single platform for all its product development data. This helped eliminate inconsistencies that occurred when many people in different cities worked on various aspects of the same robotic design. “At one point, Yanu’s interior mechanical parts were being designed in Solid Edge, while its exterior bells and whistles – many of which are handmade – were being built in other programs,” Adojaan says. “By the time we assembled our first prototype, we realized some things didn’t match. Last year we decided to bring everything into Solid Edge, and it’s made a world of difference in terms of creating a single, frictionless workflow.” Yanu Robotics also used 3D printing to improve the prototyping process, which allowed the team to make low-cost physical prototypes and quick, iterative changes based on fit, function and aesthetics. “We used 3D printing a lot for prototyping purposes, and Solid Edge has great tools that support those goals,” Ruut says.

Coming to a bar near you

Using Solid Edge enabled Adojaan to bring his bartending robot to market quickly by eliminating design inconsistencies and streamlining the robotic development process. “I could even start selling Yanu to clients before we had one built,” he says. “This ability is critical for startups and other small companies, as it helps us reach out to clients for early feedback, test the market and get our products out faster.”

“Solid Edge helped us balance innovation and functionality in creating Yanu,” says Adojaan. “Without it, we’d be in trouble.”