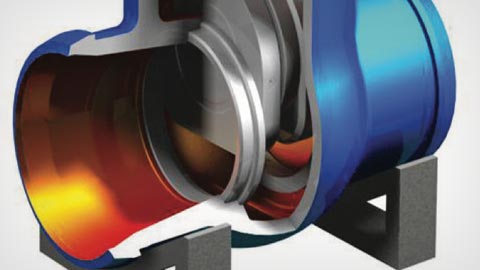 From steam ships built on the River Clyde in Scotland to the latest power station in Asia, and from the height of Victorian engineering innovation to the rise of China as manufacturer to the world, the story of The Weir Group PLC spans time and place. Today, Weir Valves & Controls UK Limited (WVC UK) – a subsidiary company of the Power & Industrial Division of The Weir Group PLC – supplies its offerings to the power generation, oil and gas exploration and general industrial sectors.

WVC UK first installed 10 seats of Siemens Digital Industries Software’s Solid Edge® software in 2000. In 2005, it went through a major reorganization, which involved focusing primarily on designing, outsourcing manufacturing and developing a new facility where it could assemble and test products before delivery to customers. At this time, Solid Edge became an even more critical business tool, with the company spending time consolidating the CAD skills of its engineers. “Solid Edge is easy to learn, user friendly and intuitive,” notes Jonathan Mills, engineering manager at WVC UK. “This is important to us as we often take on placement students and apprentices; we want them to be able to effectively use the software.”

By 2007, the company was ready to take another step forward. Mills explains, “We had identified two issues that arose, because information was kept in various places: the inefficient use of time and a negative impact on quality. Engineers, for example, were manually creating spreadsheet parts lists that were independent of SAP and Solid Edge. Our history includes the assimilation of different companies, with different part naming conventions. Components ended up duplicated in stock and searching parts was difficult. We were also rekeying information to do with drawings, bills of materials (BOMs) and change notes.”

WVC UK calculated that its engineers were spending as much as 80 percent of their time using SAP® software, often on clerical activities associated with purchasing and production control. Following the company’s original move to Solid Edge, SAP only controlled 2D drawings, which meant engineers were often spending half an hour a day on paperwork related to nonconformance and engineering change requests. In addition to time spent on nonvalue-added tasks, WVC UK estimated that between 5 to 10 percent of its BOMs in SAP were incorrect. File management was also inconsistent, particularly as some files were stored on local machines. “It was clear that our data and process ownership and engineering sign-off procedures were not robust,” says Mills. “However, it was difficult to make big changes as these would inevitably involve other departments.”